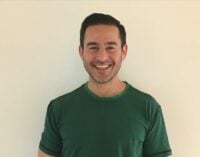 In a demographic that often looks to meds and therapies for help with anxiety and self-control, Chris Capitelli brings another solution that is fun, communal, and most of all, effective.

“….Aaaand, lion’s breath out.” Roars and feral lion sounds rise throughout the room.

“What other kinds of animals can we do?” 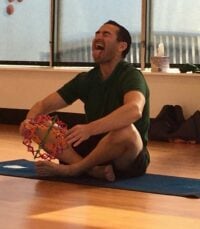 “OK, what does THAT sound like?” Whinnies and giggles bubble through the group.

For fifty minutes, Capitelli leads a small group of kids through a wide range of yoga activities. Most of his students are teens; all have some form of special needs.

Some are on the autism spectrum. Many, if not all, have sensory integration issues, making it difficult for them to calm themselves. There is a sprinkling of other issues and developmental delays as well.

Kids with these types of issues struggle with self-regulation. A lot. Their tendency toward anxiety and overwhelm, along with with a decreased ability to calm themselves, often combine to create frustration and frayed nerves all the way around.

You’d think he has his work cut out for him with this population, but he does a remarkable job of getting them to relax and focus while keeping the pace brisk and leading them through games that keep them eager and engaged.

“Yoga for the ears! Raise your hand when you can’t hear the sound any more!” The room goes still as everyone listens intently for the last, faint 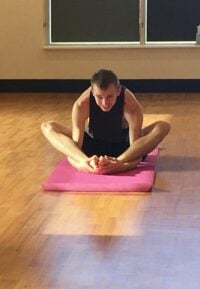 reverberations of a Tibetan bowl.

“Yoga for the eyes! One minute!” Chris holds up a funky little gadget with glowing bubbles that bounce around inside.

He’s had a core group of about 10 loyal students, give or take, since the class began in 2014. Some kids found
it challenging to deal with a male teacher at first, but Capitelli has a unique blend of steadiness and gentle playfulness that quickly put his students at ease.

During the last five years, he has seen a marked improvement in his students’ ability to self-regulate, relax, and control their attention. Their caregivers report that they see improvements during the rest of the week too.

“It’s about learning to slow down the nervous system, and learning that you can have control over that,” says Capitelli. “It’s been really gratifying to see their progress.”

“The social component is also really important,” he explains. “Maybe even more important than the actual yoga. These kids usually feel like the outsiders, but this is just for them. It creates community. Sometimes the families join in, and it’s all really chill and sweet. They feel comfortable being themselves here.”

“The larger Yoga Pod community has been super cool as well. People know the kids now, and they call them by name and are really friendly, so the 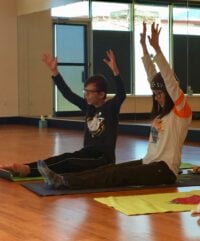 kids feel at ease and accepted…something they don’t always get.”

“This has been amazing,” one of the mothers says. “This has definitely helped my son learn to follow directions and relax.”

In 2013, Capitelli – a massage therapist, craniosacral practitioner, and certified yoga teacher – started working with a boy on the autism spectrum. This was new territory for him, and he wanted to learn more about how to support his client. He found something that is certainly not news for families dealing with autism: there is an extremely limited range of resources out there for the autism community.

Then, his mother in New York sent him an article for Pop Earth, a nonprofit that provides holistic health services and options for those with special needs, especially autism. Deb Stone, the founder, has a son on the spectrum and had begun Pop Earth after becoming frustrated with the lack of services.

Capitelli called Stone, and after a lengthy conversation she asked if he’d like to bring Pop Earth to Colorado in the form of yoga classes. Capitelli enthusiastically agreed, and things fell into place with surprising speed: Yoga Pod, a chain of yoga studios, donated space in their Boulder location; 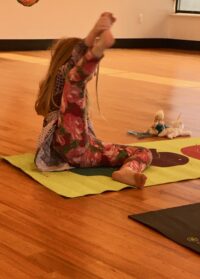 local news outlets did spots on the fledgling class; businesses donated equipment; and Capitelli had a class!

“This found me,” he says. “It just felt like something that was meant to be.”

As the group settles into a long relaxation pose at the end of class, I can’t help thinking that these kids might actually be ahead of the game in their ability to become this still.

To contact Chris Capitelli about his Boulder class, email him at roothealth@yahoo.com or go to his website at www.roothealthco.com.